4 cases where a virtual assembly line helps manufacturing [Use Cases]

It has become quite common for industries to rely on 3D models to design their products. Things get more complicated when it comes to process-design. VR takes manufacturing a step further, making it possible to visualize or simulate assembly process, maintenance scenario or quality control. Virtual reality offers many benefits for manufacturing.

Let’s see how VR can be a game-changer for manufacturing plants, through 4 real-life situations in which Virtual Reality has helped engineers optimize the design of a virtual assembly line

1. IMPROVE THE PRODUCTION PROCESS BY VISUALIZING A PRODUCT IN VIRTUAL REALITY

How do you organize a manufacturing line that will maximize productivity at minimal cost while delivering adequate quality level?  This is the question manufacturing engineers address every day, through many challenges:

One of the inputs for Methods Engineers is the product itself. Can it be easily assembled? How mountable are its different parts?

It is not unusual to hear that these questions are usually answered at a too late a stage in the development process (usually when physical prototypes start to be available), creating headaches for people in charge of manufacturing. Who hasn’t heard of this car whose doors needed to be dismantled for the seats to be hauled in the body?

Virtual Reality can now help to check the manufacturability at each stage of a project, to avoid such situations. As soon as the future product starts to be designed on a CAD software, it is now feasible to ensure it can be smoothly manufactured. Using the “Virtual Assembly” feature of TechViz, it is possible to move interactively any part of the CAD model, see the collisions and record a path that can be reloaded later for further studies. This enables the user to validate mounting and unmounting tasks, taking into account mechanical constraints between parts (axial pivot, linear translation…).

2. SET-UP OR REORGANIZE YOUR MANUFACTURING LINE WITH VR SIMULATION AND 3D POINT CLOUDS

One of the key factors impacting the task of setting-up a production line is whether it is based on a greenfield approach, with a new facility being built at the same time as the line itself or whether it is targeted to be inserted into an existing factory.

Both cases have their own set of challenges and being able to visualize the future manufacturing line in its environment at every stage of the project is definitely a key advantage. VR simulation offers one of the best decision-making tools you can use to solve many issues. It can show you performance changes you can expect from applying changes to your process. By using VR in business, it is possible to test the feasibility and real performance of several scenarios in an immersive environment, without wasting money.

For new buildings, current standards are to use BIM models, so companies can rely on their “as-designed” 3D data. But if you rely on an existing facility, you may not have its 3D representation. One solution here is to use laser-scanning techniques or photogrammetry to get a point cloud of your buildings. Comparing the "as-built" data from the 3D point cloud and the "as-designed" information in the BIM model enables construction companies to build more-effectively.

A good use case is how TechViz has helped one of their clients, a tier-1 automotive manufacturer, to set-up the production line of a new model. As it is often the case in this industry, the factory in which the model was to be assembled had been in operation for quite a while and did not have a digital twin. Thanks to TechViz “Fusion” feature, it has been possible anyway to check that the new equipment had no interference with the structure while it was brought in or during operations. To achieve this result, the factory building was scanned and the point cloud image on Leica Cyclone and then overlaid with the CAD model of the new equipment, designed on Siemens PLM tools. 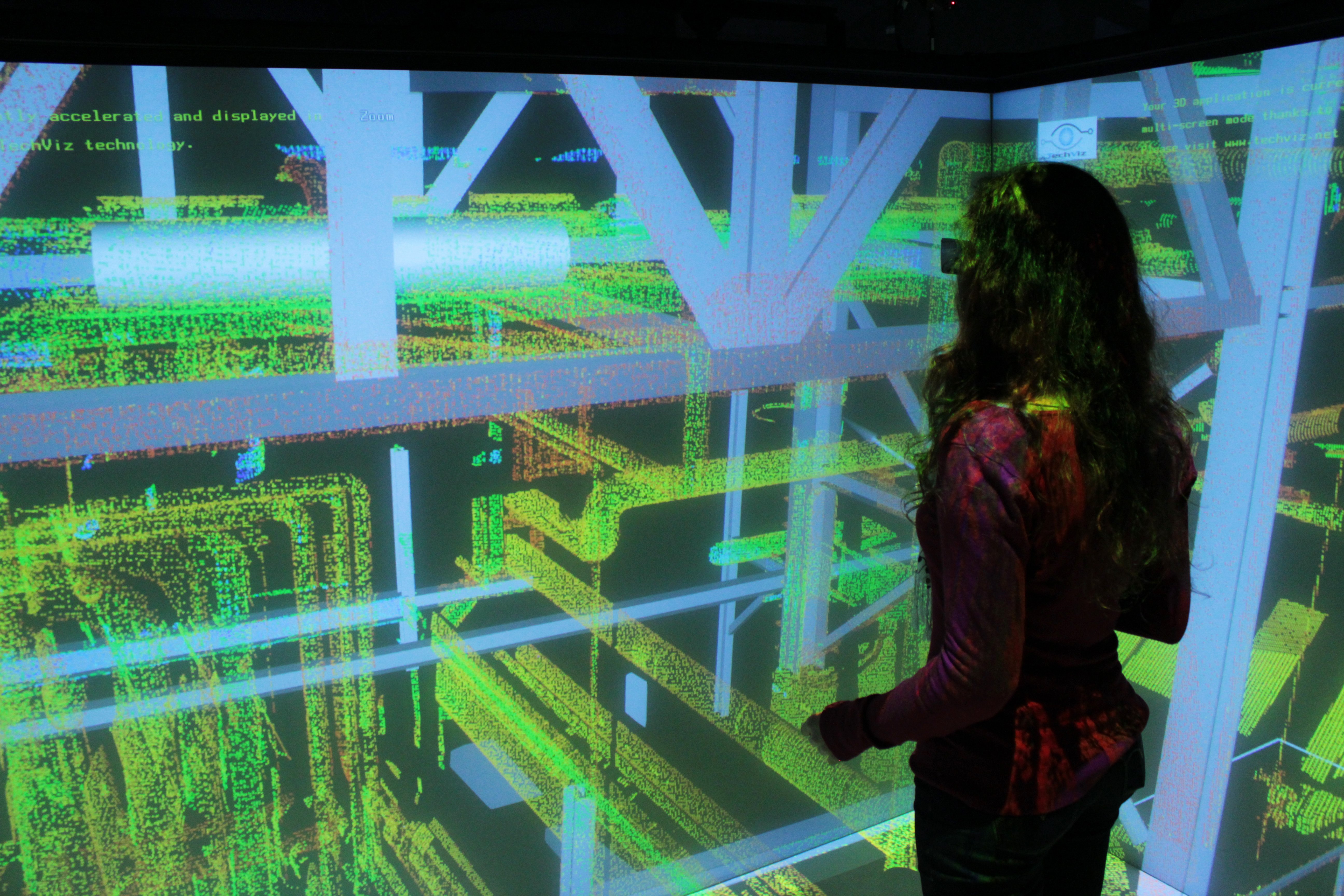 3. OPTIMIZE YOUR WORKSPACE ERGONOMICS WITH BODY TRACKING AND VR SIMULATION

Another use of VR for manufacturing that is gathering steam is the design of manufacturing workstations from an ergonomic standpoint.

Even with 3D models, it is difficult to plan how people move and interact with the equipment. CAD software can generate a manikin, and it is possible to make them move with points and clicks. You can get a much more realistic simulation by tracking movements with a bodysuit. But visualizing the right moves in a CAD model might still not be enough to envision the right layout of the workplace.

This is where VR simulation comes in. Movements can actually be tested in real-life conditions.

Here’s an example of how TechViz software helped a client redesign a workspace. Do you know about the “stop the line” standard? When an employee notices a defect on the product under assembly, he has a responsibility to pull a cord that stops everything until the issue is solved.

The client noticed that the location of the “stop the line” cord was suboptimal in their assembly line. The workers couldn’t reach it properly, causing delay in fixing the detected quality incidents. TechViz used a body tracking suit and software to record realistic movements for the worker in the client’s CAD model. Head movements and point of view was also recorded and updated through TechViz software.

In this particular case, the client could run several VR simulations based on different scenarios of incidents happening on the manufacturing line. In short, VR helped the client design better workstations, both in terms of ergonomics for their employee and efficiency of the quality control.

Projects spanning over multiple plants are increasingly common and tend to become the norm. According to a McKinsey Global Institute Report, the number of people working on global projects will reach 3.5 billion by 2030. Project planning is a key factor in project success. But how can companies with facilities and offices spread all around the globe can work efficiently on the same project?

Setting up the production process implies many challenges, from the production facilities that don’t have the same layout and constraints (greenfield plant versus existing factory for instance) to the very diverse physical characteristics of the workforce (US worker versus Chinese worker for instance), to different manufacturing technologies that are used (laser welding versus traditional welding for instance).

Traditionally, these issues are addressed by first defining the manufacturing process for one factory -often called the mother plant. Once the process is stabilized as production ramps up at this factory, it is adapted into secondary plants.

Yet, as many studies have shown that time to market is key to the profitability of a project, there is an increasing pressure to launch all factories as simultaneously as possible. VR Collaboration is one of the tools that make this prowess possible. With VR collaboration, multiple users can navigate the same 3D model from different locations and with different VR display system (HMD, 3D screen, CAVE…). Secondary factories can thus be involved much earlier in the design-to-manufacturing process, explaining and quite literally showing their specific set of constraints. Even if adaptations are still needed, their scale is often much smaller and easier to implement.

In short, the key benefits of VR Collaboration for manufacturing are: 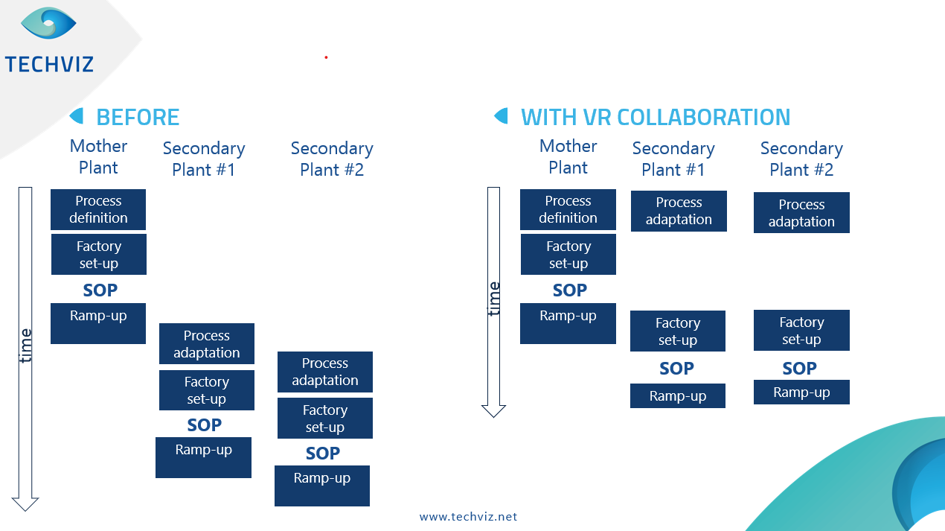 Still curious about how the uses of VR in manufacturing? Check-out our use-case to discover how TechViz helped different clients with different industrial problematics and boosted their design-to-manufacture process:

More articles about VR in manufacturing