The ROI of VR 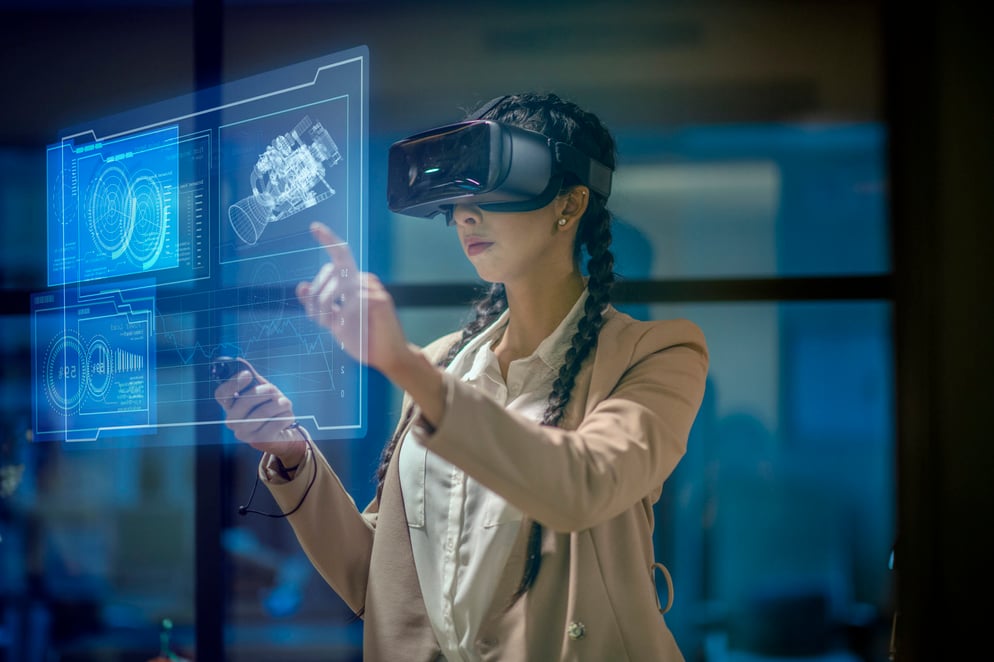 One of the main reasons some companies are still resisting the need to invest in VR is the lack of clear ROI (return on investment). Yet, some companies have taken the plunge long ago and with the benefit of hindsight, they can now tell how much extended reality (XR) has impacted their growth. According to a recent study from Forrester, Mixed Reality (MR) brought in a 3-year ROI of 177% for decision-makers.

As experts working in VR with industrial clients from 2004, we can give you some insight. Let’s see what ROI companies working in the BtoB market can expect when using XR.

1. Costs VS Benefits of a virtual reality solution

The VR headset market has become very competitive, dragging down the price of both consumer and business VR headsets in the last years: some of them like Facebook Oculus Rift S have become very affordable - $399 for a professional-use headset. While the price of VR and AR headsets is decreasing, specifications are getting better. You can use an AR or a VR headset to improve long-distance collaborative work for example, and share the same 3D data altogether in real time.

If you want to be a bit less immersed but still able to show your 3D project’s improvements to your Management, clients or partners during a meeting in the same space, you could use other VR systems such as a Powerwall, a LED Wall, or an Immersive Room. Although those VR solutions could be far more expensive than a VR headset, they are more suitable for meetings in the same space and with as many participants as you want. So you’ll need to invest in hardware, but also in software: at least one software on which you’ll work on your 3D data, and one VR software such as TechViz to instantly display all your data in VR (even if you have data on various software).

To measure how significant is the gain brought by AR / VR, you need to put the gain of production in time and money in contrast with the amount of money invested. This being said, virtual reality solutions offer many benefits. It can save you both time and money while increasing the quality of your service or product. In order to measure the effectiveness of your VR solution, you will both have to quantify and qualify accurately the improvements achieved such as how VR has accelerated your processes. For example, you can count the number of design errors or rework avoided before manufacturing the actual prototype, or analyze how VR has helped in protecting worker health and safety.

In The Total Economic Impact of Mixed Reality Using Microsoft HoloLens 2, Forrester’s financial analysis reports shows a 3-year ROI of 177% for the use of HoloLens 2 by decision-makers, with a Present Value of $11.9M, a Net present value (NPV) of $7.6M, and a payback period of 13 months. The report highlights key insights for four industries: manufacturing; architecture, engineering, and construction (AEC); healthcare providers; and education. As an example, Mixed reality improved field task efficiency by 40% and reduced rework by 75%, saving $13,680 annually per field task worker. Mixed reality on HoloLens 2 also drove important qualitative benefits including benefits to talent recruitment, employee health and safety, business continuity, customer experience, and customer outcomes.

2. The ROI of VR in Engineering

In Engineering, you can use AR or VR to make virtual project reviews and virtual collaboration over the same 3d project with various stakeholders. Those 2 functions of VR can add very high value in the progress of a project while addressing the challenges decision-makers and engineers are facing.

How much does it bring?

According to a study from Capgemini, “three in four companies using VR can attest to operational benefits of over 10%”.

Nvidia reported that “projects that fully integrate VR technologies are seeing a 60-65% reduction in the number of design issues”. When used correctly, ROI of VR can quickly be measured a few months after its integration.

One of our customers: Embraer, only took 38 months to complete the development of the EMBRAER 170 (E170) compared to the previous one (ERJ145) who took 60 months to make. Return on investment of VR is measurable in terms of time saved.

In The Penn State Ice Rink for example, numerous adjustments to the office space were made at no cost to construction as a direct result of the first CAVE visit, directly averting over $475,500 in changes after or during construction. The total amount of the redesign cost raised to -$500k.

Let’s take another example. Ford uses VR technology to identify, and then engineer alternative actions by humans captured by body motion sensors during assembling, which has resulted in a 70% drop in employee injuries and a 90% reduction in ergonomic issues.

Virtual reality is a technology that provides endless opportunities to make proves of concept. Obviously resulting to a drastic reduction of costs. Besides, VR makes it easier to push new ideas & projects forward in front of top managers before it gets nipped in the bud.

Even though this aspect is hard to quantify, VR enables Lockheed Martin, for example, to stretch the limits of what’s possible and the possibilities seem limitless.

3. More and more companies are convinced of the ROI of VR

As a matter of fact, whatever the industrial sector, or the engineering project, design errors are inevitable. If detected too late in the development phase, these errors force the teams to go up the entire design chain (back to the drawing board, design modifications on CAD, creation of new prototypes, new tests, etc.). Which often leads to exceeding deadlines and budgets.

According to Capgemini’s study 82% of the surveyed companies that have integrated VR in their processes (603 companies) claim they obtained expected results or results beyond their expectations thanks to VR or AR. 50% of surveyed companies which haven’t adopted VR/AR yet say they wish to start using this technology within the next 3 years.

VR is a technology mature enough today to be totally trusted on its ROI. It is considered in engineering as great project performance booster by most of the biggest companies in the world.

Still having doubts about the ROI of virtual reality? TechViz may help you in accelerating your processes. Our software enables you to display 3D models in a VR system (headsets, powerwalls, immersive rooms or any other) directly from any CAD without converting any data. Feel free to contact us for any request regarding your projects or regarding our software.