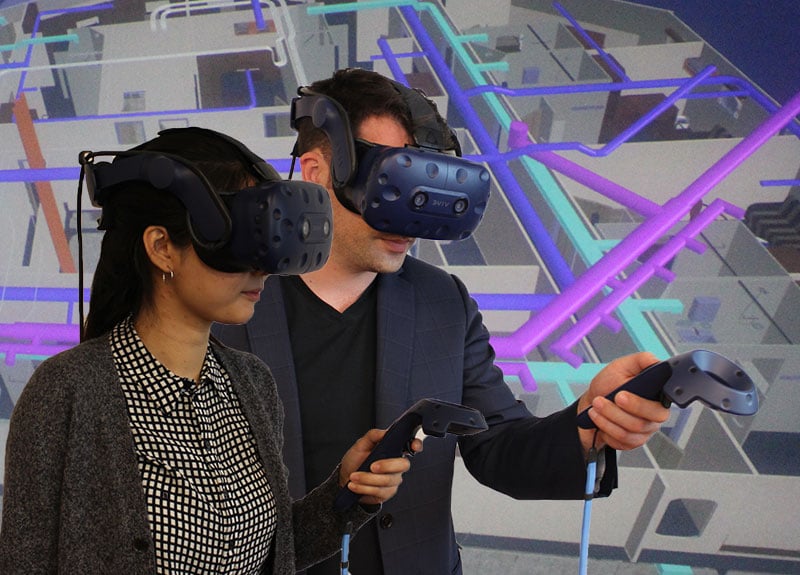 All-in-one VR headsets can also have business use cases. But since they have limited power and battery), they are more suited for small VR apps or smartphone games. If you’re aiming to better your design-to-manufacture process, standalone headsets won’t be the right choice. This is why they have not been included in this list.

What are the best VR headsets for engineers in 2020?

PC-powered headsets require a constant connexion to a powerful PC system and often need external sensors and camera to track the user’s movements. These elements imply that you will not only need further hardware investment, but also a room set-up for a better immersion. We detail more about this subject in this article.

We have shortlisted 5 best VR headsets for engineers by using our own brand of tests using Techviz VR software. We tailored our choice around the need to display (large) CAD models and 3D data while keeping a high frame rate. Discover more about our solution:

VIVE Pro is an easy-to-deploy VR system that scales with your business and provides the richest feature set for professional users.

Pros: The system offers a good resolution, and enables you to install a wireless adapter ($400) so that you can freely move around in the VR environment without being limited by the linking cable. VIVE Pro also blocks the light better than the other VIVE systems. Another feature to note: the headset generates a virtual outline of its environment to prevent users from bumping into walls or furniture.

Cons: The headset needs an external tracking system. It can use up to 16 tracking cameras, which complicates the installation of the system. This VR system also requires a powerful PC.

Oculus Rift S is the a PC-powered headset created by pioneers in VR ( Occulus first kickstarter was in 2012), and they now have Facebook’s backing.

Pros: It’s a reliable headset that offers a good resolution and a good tracking system. You don’t have to install external tracking cameras. The system has adjustable straps and its lightness makes prolonged use more comfortable. Motion tracking is very accurate for both headset and controllers. Price-wise it’s one of the most affordable VR headset on the market.

Cons: To use the headset, you have to install the Oculus software (from Facebook, which is a relatively heavy soft (16GB). This system uses Rift’s Fresnel lenses that causes a glare or halo effect, which can decrease the quality of your VR experience. Extended use leaves user with typical “VR faces”: cheeks and forehead wears marks for several hours after use. Also, your controllers run on AA battery, and they may eat them at a fast pace.

6 months after the Varjo VR-1, the brand issues 2 new models tailored for business-use. VR-2 Pro adds several new components to reduce side-effects and gain a more natural and more detailed image quality. It also has a 10 meter cable and a counterweight to improve user comfort over extended use.

Pros: Offers an angular resolution screen (equivalent as the human eye resolution). Ergonomics are improved thanks to the counterweight that helps for extensive use. Several high-end components are built-in the VR system, explaining the price of the device, and giving companies the best hardware tools to use VR in their process.

Cons: the headset requires a high-end GPU to properly run. Unlike Varjo SDK apps, Steam VR apps can’t use the angular screen to its full potential. This headset is also the most expensive of our test. You will also need to buy tracking cameras separately.

The HP Reverb VR headset offers some high-end specs that help him stand out among the competition. It is a mid-market product with a good balance of balance of  price and hardware.

Cons: The controller requires batteries. The software setup can be tricky, and the Windows Mixed Reality platform has a limited number of applications. Competitors have better tracking systems.

Pimax offers the first 8K headset to VR users. This difference in screen resolution makes the images way more defined and the colors brighter. It allows for a smoother VR experience and a high-quality immersion.

Pros: The headset can be worn painlessly over a pair of glasses. The absence of black border inside the VR experience improves the user immersion greatly and reduces motion sickness.

Cons: The light inside the VR experience is distorted. Although it offers an 8K resolution, this VR system is less sharp compared to the Pimax 5K. The focus is better for in competitor’s headsets. This headset requires to buy HTC controller (but there are rumors about Pimax developing their own hand controllers).

As you read earlier, choosing the best VR headset for your engineers can be quite complicated. Here are the main product specifications you can use to narrow your choice:

All the headsets presented in this article are fully compatible with TechViz VR software. Our software enables designers and engineers to visualize their native 3D data in 1:1 scale from more than 200 compatible applications based both on OpenGL and DirectX. It can display large-scale CAD models (up to 1 billion triangles) without data conversion, and offers a wide range of additional features.

Also, remember that in the end, what matters most in the choice of your headset is your virtual reality use case. Sure, some HMD offers a wider field of view, and others are easier to set-up with your VR system, but if you really need some specific features, why don’t you ask our teams?

Keep reading on VR for engineers: