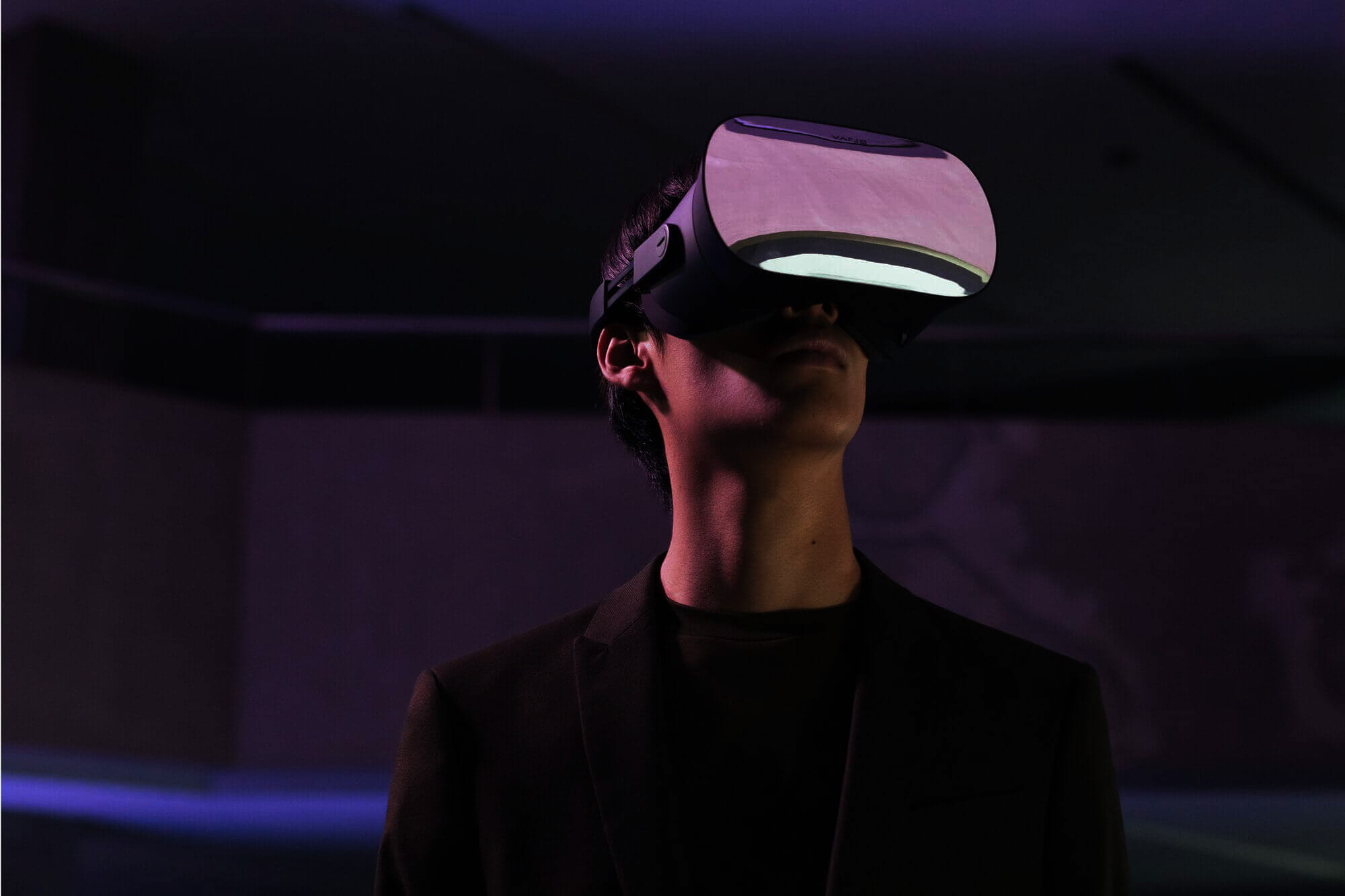 Studies predict that professional use of Virtual Reality (VR) will increase tremendously in the next few years. Thus, the Metaverse is more and more at the heart of all discussions, as the mean that will transform the way we connect, interact and grow, through AR and VR. In order to optimize their products and lower their costs, most of the biggest industrial players have already adopted VR or AR systems to help them take more effective decisions for design and engineering. However, some companies remain reluctant to the change, and there is still a long way to go before VR becomes the norm in the industry.

Choosing the best VR system in 2022 for your business is about finding the right technology/use case fit. Depending on the process you want to improve with augmented and virtual reality, you will have to choose between (among other technologies) an immersive room, a Powerwall or a VR/AR headset.

The differences between the VR system aren’t simply based on the use case, but can also comprise technical terms. Before delving inside this article, you might want to get a better understanding of some VR concepts.

HOW TO USE HMDs FOR YOUR BUSINESS PROJECTS?

VR Headsets or HMDs (Head-Mounted Display) as they are officially denominated, are the first VR display that come to mind. They mostly fit into three categories, with very different use cases:

First thing first: you can forget about smartphone-powered devices for business purposes. Yes, Google cardboard are very amusing. You can customize, and give them away in a trade fair. But let’s be honest a minute: your prospects will be more likely to contact you after a qualitative immersive virtual reality experience using the business card you gave them, than with the VR goodies you printed. Also, there are no killer-apps available, and watching 360 videos on your smartphone will quickly get old.

On the other hand, standalone devices are more likely to reach the public. As of today, standalone devices are mostly used for gaming. One of the most affordable head-mounted display on the market is the Meta Quest 2 (formerly Oculus Quest). Another good choice is Microsoft HoloLens. As people will be more and more used to consume VR content, therefore drawing consumers to brands that will propose it, such as serious-games or project presentations. It can also be a game-changer for ecommerce retailers, as 80% of global consumers think “the ability to touch, feel and try products” is a deciding factor in a purchase. Even if they are affordable and easily to set up/transport/use, you will be very limited by the processing power, the battery and the screen resolution.

The most used VR system by companies are tethered headsets such as HTC Vive or Oculus Rift because they are mostly affordable for companies and don’t an entire room devoted to a complete virtual reality system (you will still need an appropriate space to facilitate the navigation in the virtual space, though). With the right PC or Mac system you will be able to get an ideal screen resolution, frame and refresh rate and processing power. Besides, you will be able to adjust your system to your purposes, which offers companies the possibility to display big-scale CAD models in real size. The flexibility of the system enables tethered HMD to adapt to very different use cases. However, it is more difficult to use and comes at a higher price than standalone devices. The set-up is more complex, as you will most-likely need to install specific drivers for your hardware and software to work properly.

WHY INVESTING IN A POWERWALL IS BETTER FOR TEAMWORK?

Apart from HMDs, the second big category of VR display is projection-based: one or various projectors display at high-speed two slightly different set of images. The 3D effect is created thanks to special glasses that shutter in sync with the images.

Such installation with one projector is usually called a Powerwall. They are less immersive than an HMD, but also better to promote teamwork. Headsets are tailored for a single person, as the user is fully immersed into the simulated environment without seeing the environment around anymore. With a Powerwall, the user still keeps the contact with people around, creating a balance between immersion and teamwork. Working with this VR system during extended time periods is a better experience as they don’t get too uncomfortable, and the better screen resolution limits the chances to get side effects. In short, Powerwalls are ideal for presentations, whether it aims to wow a prospect or convince your superiors.

Lately, it has been increasingly popular to create Powerwalls using LED tiles instead of projectors. This has an obvious benefit in terms of space requirement, as it can be fitted in any standard meeting room. On the other hand, the image with LED tiles is pixelated when you’re close to the screen, whereas it isn’t with a projector. This can impact the immersive experience negatively.

HOW CAVES HELP YOU WITH ENGINEERING AND SCIENTIFIC PROJECTS?

An Immersive Room, also often called a CAVE (Cave Automatic Virtual Environment) are systems with two or more projectors and screens, to improve the immersive effect. It is an ideal set-up for use cases such as:

Of course, you could still do these operations with HMDs, but it will be very impractical. Imagine two engineers trying to work together on the same 3D model, but unable to see one another’s (real) body. Especially if they don’t work from the same location.

Besides, when it comes to large-scale projects, a CAVE is better to display it in 1:1 scale, with a good image quality and screen resolution.

Granted, an immersive VR room is still less immersive than an HMD, but this is not necessarily a bad thing. Being able to see your real body while experiencing the VR is less intrusive and disorienting for users and reduces the risk of negative side effects. You will avoid the risk to run in an obstacle (or in another colleague)! And you can also grab a paper and a pen (or any other 2D material you need), rather than pinning notes directly in the software, and easily go back and forth in the reality of a meeting situation and the VR simulation.

The biggest problem with an immersive room is the price and the dedicated space. Provide at least 500K and an entire room for your installation. If your company never used VR before, and still wonders about the ROI of VR, you should try for a smaller VR system first.

HMD vs Powerwall vs CAVE

Don’t make a comparative because each system is for a different use case. Head-mounted devices are great for some use cases, and immersive rooms are better with others. In the end, remember that the choice of the best VR system for your business depends on how your business uses VR

But in short, what are the pros and cons of every VR system ? 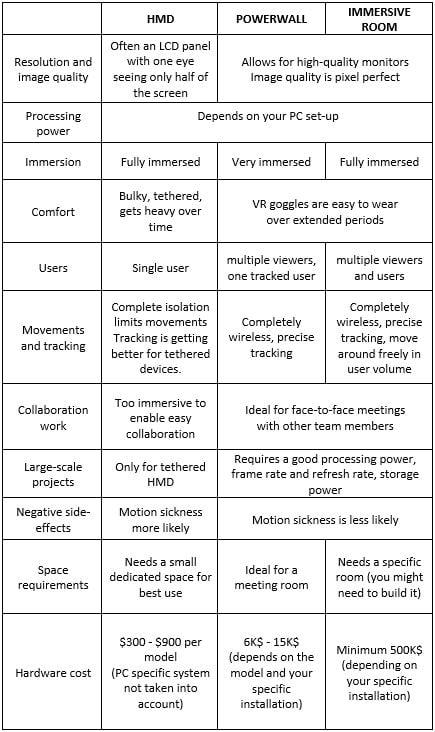