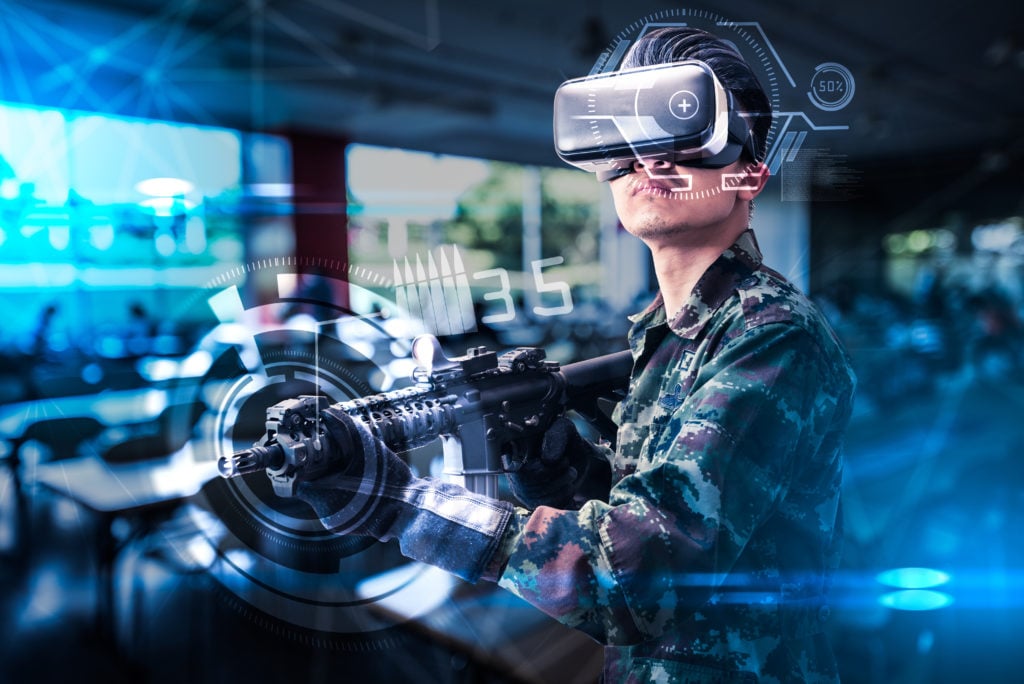 Virtual reality is a computer-generated environment that enables the viewer to be completely immersed in their 3D data. Military and defense are one of the most important application fields for virtual and augmented technology. VR is even one of the key technologies listed by the US Department of Defense in the 21st century. In this article, let’s discover the current uses of Virtual Reality in the defense industry and the military field.

Virtual reality training is a common use case for VR technologies. It often helps for training exercises that are too rare, too expensive, or too dangerous to be done in real life. Training simulation in the military field fosters the combat skills of small-scale units or single soldiers by simulating actual vehicles, soldiers and combat environment With a VR headset and controllers, trainees are completely immersed in virtual environments. For example, you can have a flight simulator overlaid with a virtual world rendering an actual battlefield for a complete pilot training (this type of virtual reality simulation can be done using TechViz Fusion). All the user’s senses can be stimulated to fully recreate the pilot training.

Depending on the virtual reality experience, it might deal with sensitive data or only concern a few people. “Classic” VR solutions will have troubles dealing with a restricted audience and/or particular use cases. A versatile solution like TechViz software will probably suit you better if you are looking for specialized VR training solutions.

Let’s say you are using a driving simulator. Virtual training can help you simulate different events like vehicle collisions or hostile armed forces. But it can also help you check the ergonomics of the cockpit you’re simulating, by seeing in a real situation (almost), if the instrument panel is comfortable to use, and if all the buttons and commands can be reached out.

Specialized training also applies to maintenance and assembly technicians. Experienced support personnel are only a few in this sector, and their knowledge must be transferred somehow. The use of virtual and mixed-reality technologies is a solution for this challenge. As an example, in the marine corps, each boat can have specific engineering constraints, leading to a different maintenance scenario from a boat to another. To be immediately operational, technicians can view the CAD model in VR and get an army specialized training program “on the boat” before their operation.

2. Preparing a military simulation training before an operation 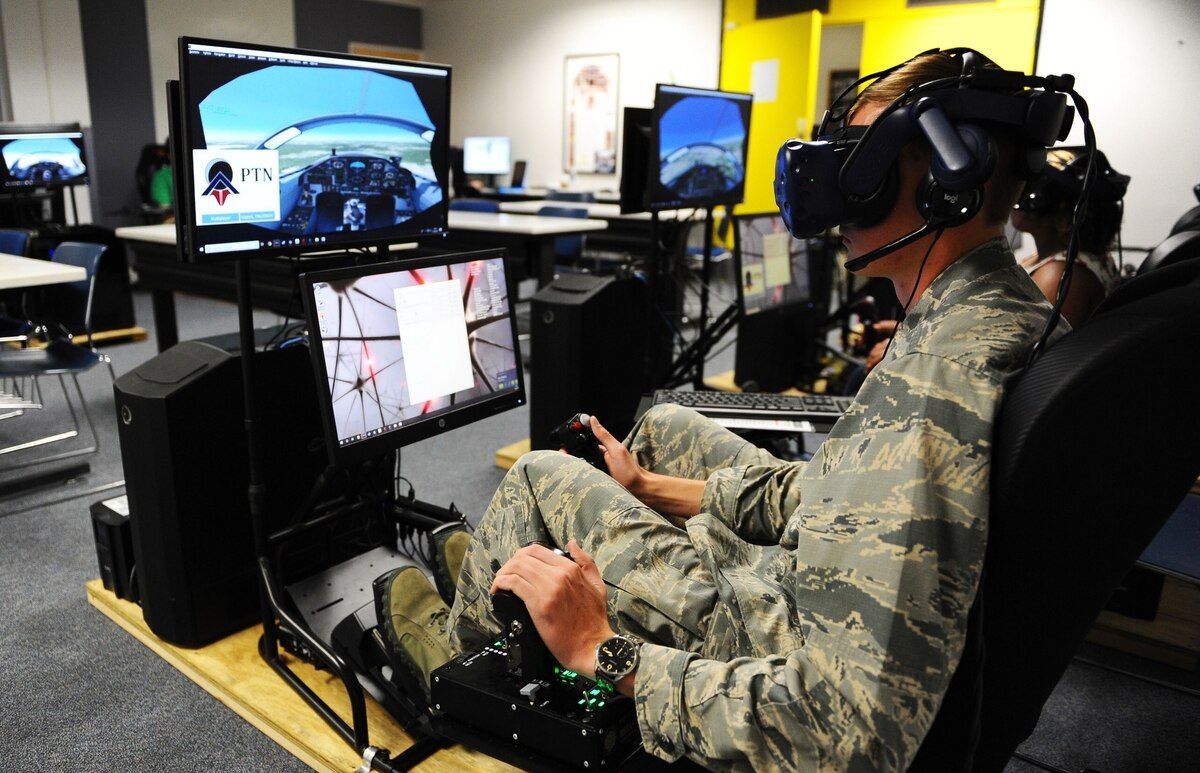 This use case can also concern training simulation. Traditional military exercises are expensive and last awfully long. Both aspects can be significantly reduced by using augmented and virtual technologies. Why? Because you can recreate all the conditions you want without endangering the agents. For instance, you can have a team solve problems in a “real” confrontation, without the limitation of the geographic area.

But VR also helps with decision-making and tactics in actual combat situation. By rendering actual battlefield in VR and giving a fully immersive experience to the users, the command staff can easily grasp the situation. By running simulation and testing it, the commander can understand a series of possible outcomes and set better battle plans.

A lot of defense equipment are intensive complex electromechanical systems, such as aircrafts, spacecrafts, ships… And, of course, not all equipment is used in the conditions the engineers had in mind when they conceived it. Virtual reality is the perfect tool for conceiving and optimizing military equipment. For example, some vehicles can end up being used in other climatic or environmental conditions. In any cases, if the end users notices what parts are showing excessive wear, the information can travel back to the design teams, so that the next designed model (or just the fixing parts) will be better.

Virtual reality has changed the way we design products, whether from a conception or a testing standpoint. It is a powerful tool for industries embracing Industry 4.0, like the defense industry. During weapon development, immersive virtual reality helps engineers:

VR speeds up product development for the new weapons or military installations and betters their overall effectiveness and quality. It allows for an immersive visualization and interaction for running tests. This is particularly effective when developing large-scale products such as an aircraft or a ship. CAD modelling in VR helps you visualize your designs at the 1:1 scale and make changes in real time.

Besides, with cloud technologies and 5G becoming more and more common, military research labs will also need to collaborate seamlessly with one another, even when they are distant from thousands of kilometers. This particular use case happened with TechViz VR remote collaboration software, which helped two labs designing nuclear submarines with VR remote collaboration. 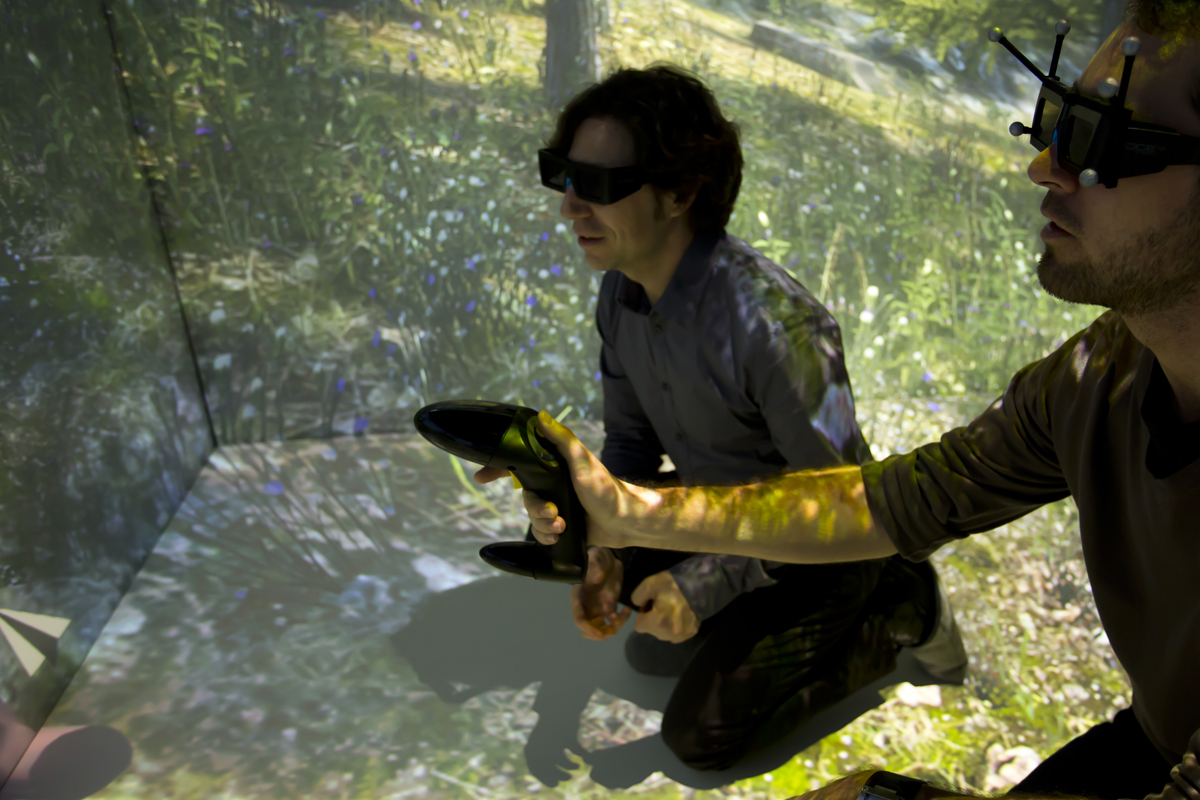 Collaboration in VR between distant sites is important today, especially when anticipating the future of work. However, videoconference tools offer a limited immersion when it comes to complex tasks. With virtual reality systems, several users can work on the same 3D models, at real scale and in real time. Remote work in VR is crucial when countries are sharing military assets and/or research to create a virtual prototype.

On a military mission, this feature can serve for another use case. It can allow an operator to get data from a location, without being physically present. It opens new possibilities for information gathering operations in hostile territory, as the operator will be able to move the sensors, while being in a realistic rendering. It makes the operation safer and increases the stealth of the agent, as the reconnaissance vehicle does not need to transport real passengers.

If you are looking for a VR software that can help you with specialized military training, VR remote collaboration and equipment engineering, why don’t you try TechViz software? Techviz is a virtual reality software specialized for engineering and industry use. It enables you to display three-dimensional virtual worlds and virtual objects based on your native 3D data. TechViz VR software helps for viewing CAD models in VR. It is compatible with any head-mounted display on the market (HTC vive, Oculus Rift, Samsung gear VR), and any projection devices like an immersive room or a PowerWall VR. It is also compatible with 200+ CAD applications (like CATIA VR, Creo VR, Siemens VR…) and allow you to combine your virtual reality devices with motion-tracking, finger tracking or any other tracking system, depending on your use case.

Want to know more? Check-out our other articles about virtual and augmented reality in other industries: